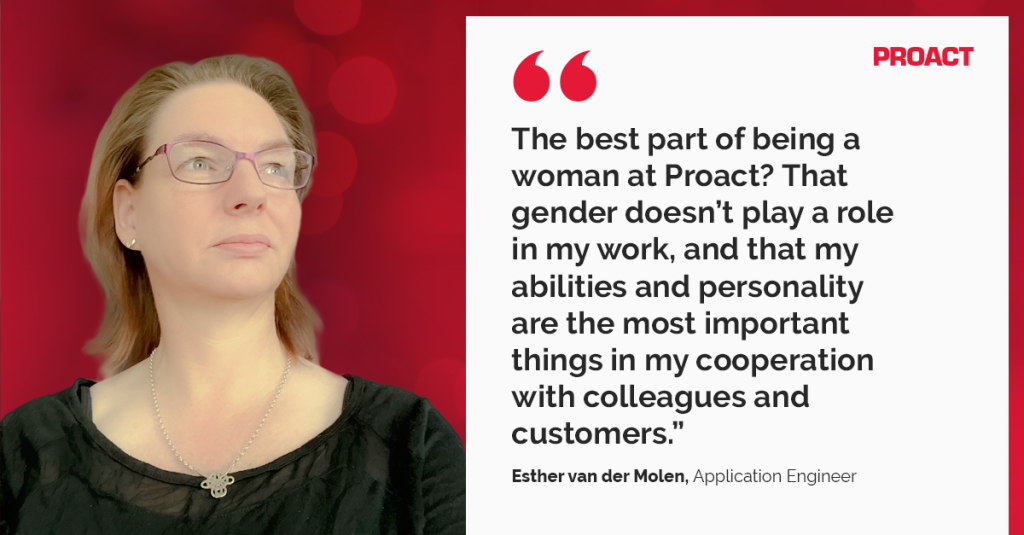 This is article one of three in our Women in Tech series, featuring stories from women at Proact about their experiences in the IT industry.

How long have you been working at Proact? What is your role and what are your most important tasks?

I started at Peopleware/Proact in August 2019 as a SharePoint administrator/application engineer. My most important task is to keep customers (internal and external) happy. This entails making changes, solving incidents, and giving advice, so the customers can do their jobs properly.

Did you show an early interest in technology as a young person?

There were several experiences I had as a pupil that demonstrated my interest. Perhaps the most telling incident was when I found myself with some classmates in front of a computer. The monitor display said, “Press any key” and the other kids were searching for that elusive “any” key! I pushed my arm between them and dropped my finger onto a random key. They were annoyed with me. The supervisor’s response was simply: “Oh, you’re not afraid of computers.” I said “No,” and moved on. Maybe If she had said something more, I could have been more encouraged to pursue my interest in the topic.

Later on in my schooling, a math teacher provided a year of lessons in computer science, where I started learning programming on the Commodore 64. Unfortunately, this course was discontinued after being offered for just one year.

Was it clear to you from the beginning that you wanted to pursue a career in IT, or did you only decide to do it after other professional experiences?

My education is in retail management. I somehow shifted to assisting management but always was – compared to colleagues – handy with computers and (jammed) printers. At my first real job, I squeezed myself into the IT department. After a couple of employers, I started to assist the IT-manager and took some courses such as ITIL. During a big project involving migration of the whole IT environment to a new IT partner, we hired a test manager who inspired my interest in testing. He lobbied for me to take the SharePoint administrator role, which I subsequently did. I also took further courses to become a test engineer and test manager.

It is well known that IT professions are still predominantly filled by men. Why do you believe this imbalance still exists?

That’s simply how it was back in the day. Maybe women did think it didn’t suit them or they were not willing to work in a predominately male environment. However, I never believed in stereotyped roles. Whatever gender you are, you have to do what you like. And it helps if you are good at it. Besides, nowadays you do see more and more women working in IT, both in “full tech” or somewhere between IT and the business.

What is the best part of being a woman in the tech industry?

Doing what you like. You may bring a different way of seeing and/or approaching things. Often it is said that a woman’s hand brings something soft or social. But in my opinion, that depends on who you are as a person, no matter what gender.

What’s the best part of being a woman at Proact?

The fact that gender doesn’t play a role in my work, and that my abilities and personality are the most important things in my cooperation with colleagues and customers.

What advice would you give to women interested in pursuing careers in technology?

Go for it! If the interest, the ability, the possibility is there, why shouldn’t you? Besides, the choice of jobs within the IT field is enormous — there are so many paths you can take. And if you are interested in IT, you very likely have the “right” mindset for the type of work it involves.

In your opinion, are there actions everyone could take to promote gender diversity in the IT workplace?

Equal pay is crucial — not only in IT workplaces, but in all industries.

Other than that, people should just be open and not think in boxes. Remember that everyone has their own individual abilities and interests, and that these aren’t determined by their gender.